You can read everything you need to know about ds106 Radio at this page on the main ds106 site. Go read it now!

What’s on the radio?

Tune into the radio! via http://ds106rad.io/listen. 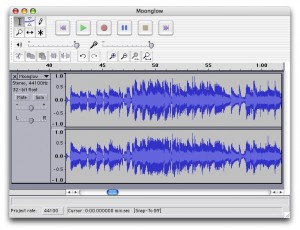 The way we run ds106 is that we never require use of any single software, but most highly recommend using Audacity for audio editing, the open source (free) audio editing software. Besides having many useful tools, a key features is its ability for multitrack editing, so you can layer your sounds. If you have other software available to you, by means use it!

The ds106 toolbox has a growing set of resources audio editing and sources of free audio to use. If you have suggestions, just leave a comment on tool page and we will add it to the box.

Some resources if you decided to use Audacity:

Radio may seem like old technology, but there is not much more powerful creativity done in a single media. Audio is effective when sounds generate stories in the minds of listeners– the audio you produce is not the whole story, it is in what the audio can evoke in the listener.

You might be familiar with the panic in the late 1930s caused when Orson Wells produced the radio show of H.G. Wells War of the Worlds– it was so effective, people thought it was real. If you think we are much more savvy in the modern age, read about what happened when producers of an Italian movie tried to play out a promotional video as something like looked like a real news broadcast.

Below are links to Ira Glass’ Series on storytelling (all together they’re about 20 minutes):

For another point of view, listen to a short interview with Radiolab‘s Jad Abumrad on “How Radio Creates Empathy”:

Some things to notice when listening to audio are the pacing (think of the equivalent of paragraphs in sound), the use of music, sound effects, ambient/environmental sounds, the introduction of radio “bumpers” to remind us of the show, introduction and exits. Of key importance is trying to hear the layering of sounds, of how audio can create a sense of place by being more than just a recording, but a deliberate stacking of audio.

For a great reference, you might listen to an episode of Howsound, the radio show that takes you behind the scenes to understand how these shows are produced- Dissecting Joanne Rosser, Papermaker.

As another example, we took out elements of an hour long episode of RadioLab, a 2007 show called Detective Stories, and uploaded a shorter version to Soundcloud, where the comments indicate how some of these are used in the show. See if you can pick these out in this example and then in other audio you listen to this week.

Another technique that is counter-intuitive, is when sound is left out. Listen to this annotated clip, an intro to an episode of the TED Radio Hour, for what happens near the 3 minute mark when the background music suddenly stops

Here are some references for audio techniques:

And, if that is not enough, among the open participants of ds106 is Scottlo, a guru of audio and radio technique. Scott was one of several ds106ers who gathered in the summer of 2013 in Kamloops, British Colombia for SoundCamp, a one day hands on experience in learning audio recording and editing technique– check out the SoundCamp site for audio resources and tutorials.

Also useful from Scottlo are archives from his daily series from the Summer ds106 Zone class of 2013, below are some selected episodes where he reviews audio and shares Audacity tips: